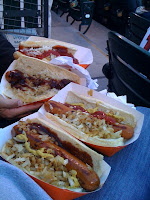 i took jeff to a game last night...sorta in return for the game he took me to...but also 'cause he's one of the few Giants fans i know that would go to a Monday night game. and he's cool, i guess. :-)

i don't think the night has quite as many adventures as 2006 - i wore no nacho cheese, i forgot the magic orange sweater, i didn't talk about all of my dream "jobs," caltrain was not free and there was no couple sucking face in front of us. actually, there were a few Braves fans right in front of us.

it was still an awesome time...things of note include:
- i got to experience Zeke's Bar
- we ate four GIANT hot dogs (i'm still feeling sick)
- i had received rock star seats behind home plate from a volleyball parent
- we had a nasty Bud Light
- a couple of guys took off their shirts for the tomahawk chop in the last innings
- jeff wore mustard, but the Tide Stick saved the day
- caltrain was much quicker on the way home thanks to a book
- the Giants WON!
- yasuda bought me Happy Donuts for the ride home