When I got on the elevator at the hotel to head over to the start line, there was already a woman on it with her race bib on. I was nervously chatty, so I asked her how she was feeling – she said, “This feels like my final exam. Did I drink enough? Prepare enough? Will I do ok?” And that was the perfect way to put it. Man, I was nervous…questioning everything I’d done to prepare…wondering how I would do. I’d set a goal with my friends to Beat Oprah (4:29:20). As of race day, I hadn’t paced a long run to actually beat her…but I’d been promised that race day would be different. I’d be faster. I wasn’t feeling so confident that morning.

We strolled over to the start line and I exclaimed several times that I was wicked, wicked nervous. My friends that had run a marathon before had rituals they were going through…and I had no idea what to do. So I stretched a little, danced around and kept my nervous face on.

Five of us started out together…around 6:30am. Campy immediately took off…and at mile 2, Kevin had to take a pit stop, leaving me, Brandy & Toño to run. They were a great support – we made it up the first hill at mile 4-5 without much issue…and continued across the Golden Gate Bridge, fighting the crowd. I started to enter “the zone” on the bridge, but stayed with my friends for the most part (Kevin had caught up). Around mile 12, I truly entered “the zone” and took off. I turned my iPod on and continued with my strong pace. My dad had told me to run the race for me…Brandy had reiterated the idea…so I did.

Around mile 14, I realized that I had a chance to beat Oprah – and I was on pace with a giant triathlete who ran with me for a couple miles. Around mile 16, I realized we were still running uphill…so I let him take off ahead of me. His legs were too long to try to keep up with.

At mile 18, I felt like I woke up from a dream – had I really been running 18 miles all morning? The course started going more downhill, which sure helped my burnin’ quads…though my knees got a little angry with me. No less, I leaned forward and prayed my feet would catch me before I tumbled…

I knew I was still on track to beat Oprah…and I thought two of my friends were in front of me, so I continued to push forward. I started to hit the wall around mile 24, but truly crashed at 25…I still have no idea how I pushed that last 1.2 miles, but I did. Even though I knew I could walk and still beat Oprah, I couldn’t walk that final mile. I had to keep moving…and I crossed the finish line at 4:22:52. Wooooooot!

I walked a half-block and sat down to collect my thoughts…say a thank you prayer…and stretch. I texted a few friends, updated Twitter & Facebook and took a call from my awesome sister. My text had said, “I beat Oprah!” She called and said, “You didn’t just beat her…you kicked her ass!” It felt so good to hear…and it was perfect to have the first person I talked to after the marathon be my sister. Man, I love her.

Turns out I was ahead of everyone else I’d run with…I’m trying not to gloat, but…YEAH! (can’t help myself) It didn’t really matter until JJ got mad that I’d beat him by 30 seconds…then I decided it was pretty great.

I owe my two greatest marathon fans a huge thank you! Becki had made signs and Mike trekked around the City with her to cheer us on at four different spots…it was awesome. There’s nothing like a couple people cheering you on to make you continue running strong through the streets of SF… Mike was even ready to run the last couple miles with me, but I’d decided at 18 that I needed to do this myself – not that I’m independent, or anything. Truth is, I’d emailed my mom & dad on Friday to admit that I had woken up with a sad heart…there’s been so much going on, and I was just feeling sad. I asked them to pray for me so I could cheer up and run this race strong because I was running it for so many people. My ever-so-wise dad replied, said a prayer and finished with “Run for you, not others....” I needed this for me. And I did it...with God at my side (or all around me, I guess).

Anyway, I did it. I ran a marathon. And I beat Oprah. I’m hangin’ up my ribbon and retiring from the full-marathon…much to my friends’ dismay. I just think a half-marathon is long enough…and hard enough on my body…I don’t ever need to run 26.2 miles again.

Thanks, everyone, for supporting me through this! I think I’ll make “healthy” brownies for my Physical Therapist – he’s got some work to do tomorrow on my leg muscles.
Posted by kristieh at 1:28 PM No comments: 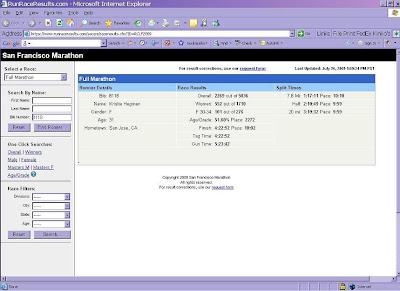 it's here! it's here! i'm supposed to eat lots of carbs today, so i'm hunting them down...yummmmmmmmm...

in case you want to track me sunday morning, i start around 6:45 and am hoping to finish by 11:15 (CA time)...
sign up to receive text messages - http://www.runsfm.com/raceweek/bazu.html
check online when you want - http://www.liveraceresults.com/liverc1/Default.aspx, bib 8118

in case you feel like donating money to something for this...
Team Fox - Parkinson's
a breast cancer 5k i'm doing - making strides
3-day breast cancer walk in SF - friends are doing it
MS Society
or you can just send me a check for my well-being.

i'll be staying at the Omni, SF on Saturday & Sunday night, in case you want to send an emergency care kit to me.

the hardest part about returning from this past two week vacation to minnesota has been to realize that nothing has really changed here. i had a pretty emotional couple of weeks with my family, dealing with all that is going on there...and i feel like i've grown a bit. i'm watching my sister battle and beat breast cancer, and i can't help but want to see the world through her eyes. as she said, "i used to think i knew right and wrong...now i KNOW right and wrong. there's no gray anymore." how awesome would it be to be able to live through those eyes?!? when i was talking to her about something going on in my life, she said, "well, it'll work or it won't." there was absolutely nothing more she needed to say...and it was awesome.

i've got a bit of a new perspective on life...plus, i'm refreshed, relaxed and ready to go...yet, everything's the same here. how do i adjust back to this life without giving up what i learned in minnesota? how do i apply all that to my current life to get where i wanna go? and, really, where do i wanna go?

life. introspection. sometimes i'm too good at it...
Posted by kristieh at 8:48 PM No comments:

there's a song about my sister!

Bomshel on 6Lyrics.com
Posted by kristieh at 9:53 AM No comments:

supposedly i'm prepared to run 26.2 miles in a row. my training schedule says so (hal higdon)...and i'm mentally prepared for it. i've run 20 miles 3 times...at least one of those times i felt like i could go 6.2 miles more. i'm ready to do this thang!

truthfully, i'm wicked nervous. so much could happen between now and july 26th...but i'll just trust that it won't. i've trained this hard - i'm actually gonna make it to the marathon. and then i'll finish it.

i do have a lot going on in life - mainly, my sister is going through chemo to completely get rid of breast cancer. i have found so much motivation because of her...and i am inspired beyond belief. she's strong, she's honest, she's hurting and she's asking for help. i wish i would win the lottery so i could just stay with her for a few months...but i have a life to live in california. i have a marathon to run. and i promise you that last 1.2 miles will be the easiest because they'll be in her honor. for the past couple months, my last mile has always been in her honor...and it's almost always been my fastest.

in the middle of one of my long runs, i had one of my most selfish thoughts. i realized that i started this marathon training a couple months before she found her lump...so though i'm running many miles in her honor, i've been working on my goal longer. maybe she needs to be inspired by me. (this thought is so ridiculous, i can't believe i even typed it...take it as further insight into my mind...if you want)

running has kept me sane. i can't imagine going through what jacque's going through...and i can't imagine being in my position without a stress release. i've been on many-a-run just to mentally work through the most recent cancer development...or to yell at God for a while...or to let Him tell me it's gonna be ok... this is why i run, folks - i love it because it's my kristie-time. it keeps me sane.

anyway, i'm gonna run a marathon. this tapering section of my training is my favorite...running 4 miles is suddenly a breeze...and only having to run 8 this weekend sounds awesome...

i guess i'm a little amazed and proud of myself. i have a tshirt to wear on marathon day - it says, "i said i'd never do it. i changed my mind." roommate, lercher & i decided that quote was a great example of the way i live life - i think some things are absolutely out of the question ridiculous - but then i do them.
Posted by kristieh at 7:42 PM No comments: